Posted at 16:43h in Uncategorized by Admin 0 Comments
1 Like

There are two kinds of Thieb  in Senegal – the white and the red. For Jollof purposes, the red known as Thieboudienne Penda Mbaye (after the lady who created it in Saint Louis in the late 19th century) is what we’re after.

Traditionally eaten on a Saturday, the best versions combine fish and root vegetables. Having never made it before, I took all the hand-holding possible. The one exception I made was the addition of Hibiscus leaves which my friend, Folakunle Oshun said he’d smelled and seen in all the pots of Jollof he ate when in Senegal.

Recipe, adapted from The Guardian

I changed the quantities of some ingredients – like the tomatoes  (increased), the tomato puree (reduced) and added some that were not included originally like Hibiscus leaves. I am also aware that some, perhaps more authentic versions use fermented/ smoked/ dried seafood. Alas, I had none of those at my disposal.

Score 4 slits on each side of the fish. Fill each slit with a tablespoon of that fine parsley paste. Heat some oil in large saucepan to shallow fry the fish. Do so and cook until the fish is just brown. Remove fish and set aside.

I like to portion out the oil once it’s cooled down, reserving some to fry the tomato sauce in and the rest to cook the vegetables. 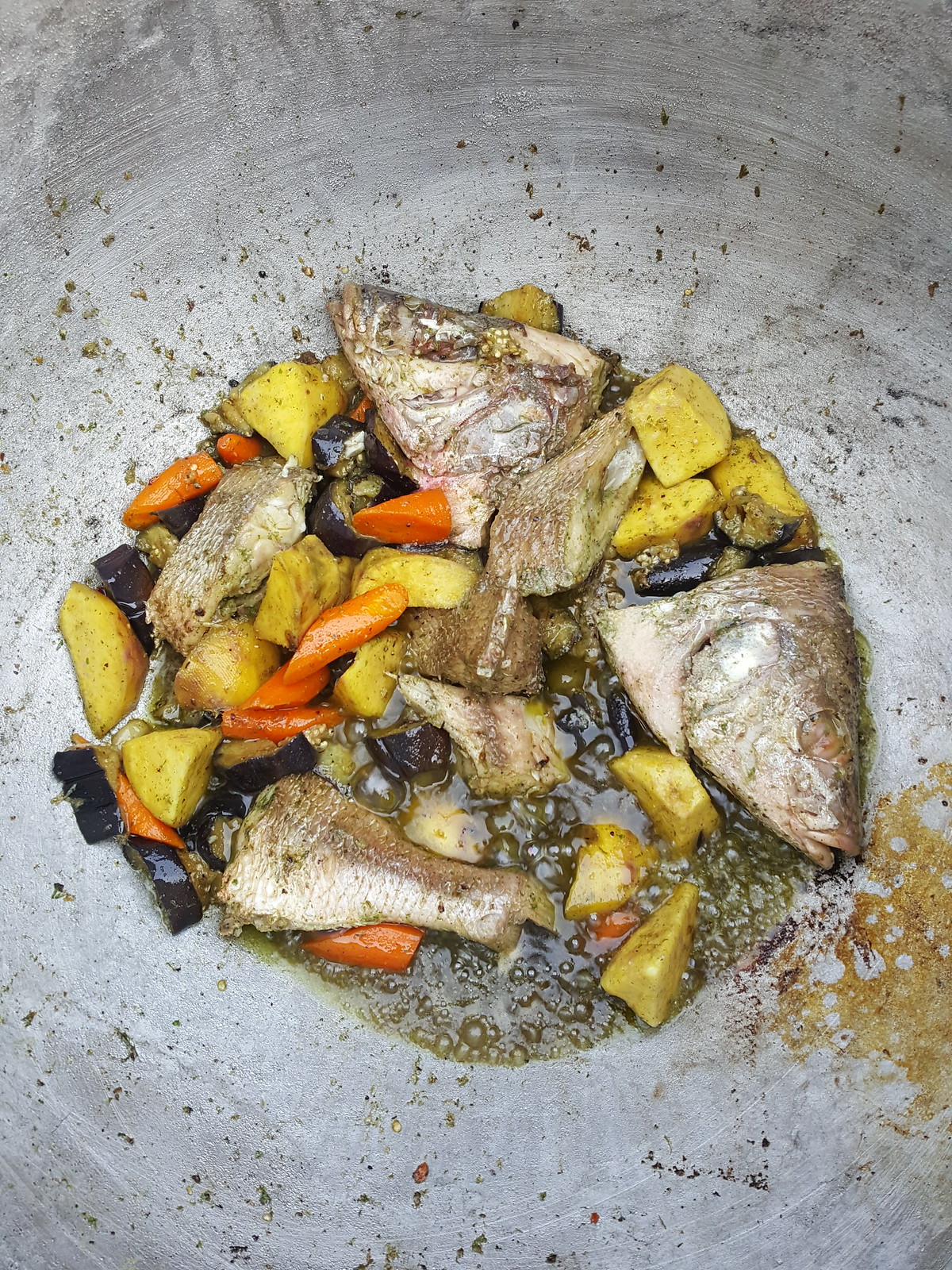 In the rest of the oil, cook the whole vegetables, with a third of the parsley mixture and water to cover. Put a lid on the saucepan and allow simmer till done, about 15 minutes. Add the fish and continue simmering gently until the vegetables are done. Remove the fish and vegetables and set aside, keeping warm

Blend the chopped tomatoes, onions, chili pepper and tomato paste. Add to the half portion of oil from frying the fish. Cook till reduced, by a third.

Add the rice to the tomato sauce as well as any juices from the fish and vegetables. Add the remaining third portion of the parsley mixture, the yakwa leaves and salt, to taste Stir well, reduce the heat, place a piece of foil, wax or parchment paper to cover the rice in addition to the lid. Cook until all the liquid is absorbed, the rice is soft and you begin to smell the rice on the bottom of the pan toasting..developing bottom pot J.

Once cooked, spread the rice out on a large platter. Arrange the fish and veggies in the centre and feast on the delight that is Thieboudienne PendaMbaye! 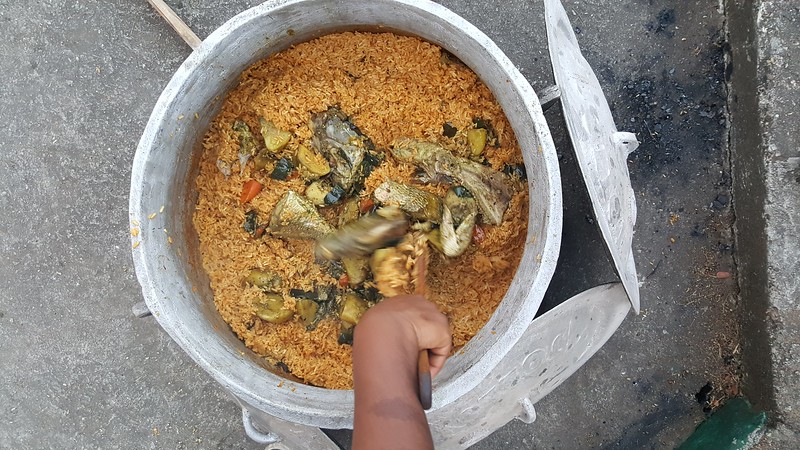 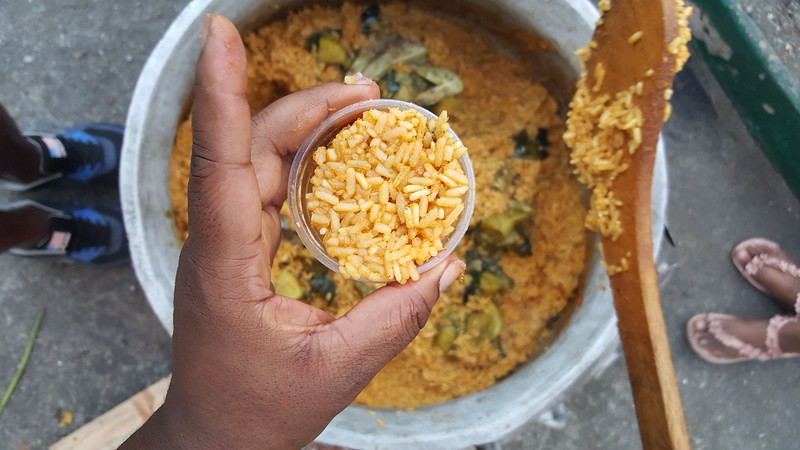 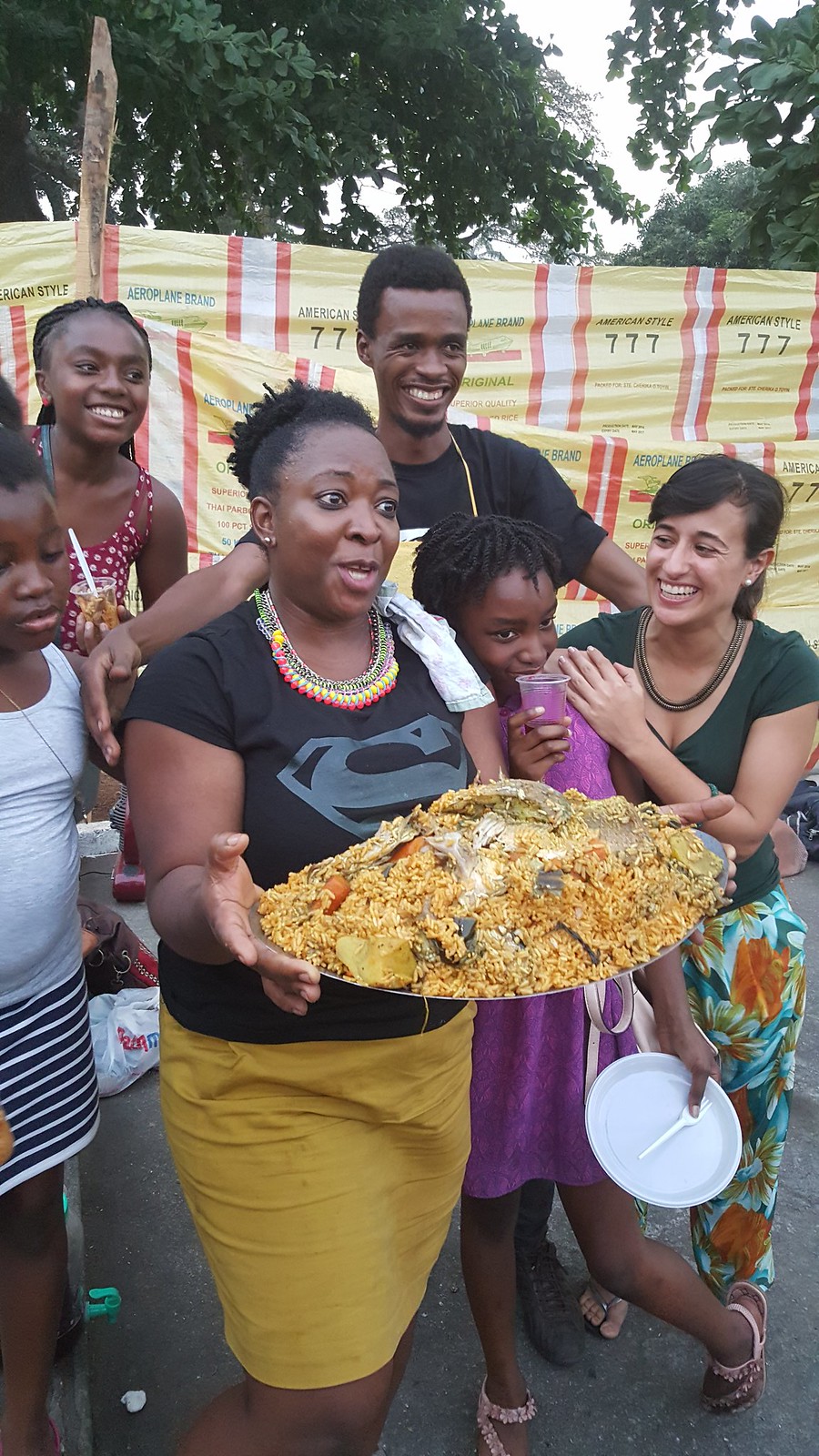